It seems everyone in Dallas is talking about Fair Park right now. And it’s not just the usual fried food anticipation that comes with every State Fair season. A few weeks ago, an old friend asked me on Facebook “Will you explain the Fair Park issue to me like I’m five years old? I don’t really understand what’s going on.” My response: “The Powers That Be want to fix something and are surprised that other people also have thoughts.”

I’ve written about Fair Park here before.  In the 9 months or so since that post, I continue to be deeply concerned about the future of Fair Park. I also continue to be deeply concerned about the lack of understanding in the community about how non-profits work.  But lately, I’ve mostly been fascinated.  This whole mess has more than a few lessons for non-profit leaders.

(For those that aren’t local and want to catch up, I highly recommend checking out the stories by Robert Wilonsky or Jim Schutze.  There are so many nuances to this whole situation, and they have already explained it as well as possible.)

Lesson #1: If you know that there’s a contentious issue coming up at a board meeting, don’t try to limit the discussion.  Back in July, the Park Board was all set to discuss the management agreement with the foundation. When they arrived that morning, the agenda had been changed at the last minute and limited to just six items. Five Park Board members walked out.  There was no longer a quorum, and the meeting ended.  It was a powerful reminder that boards do in fact have power–and there should be a power balance between the ED/Chair and the rest of the board.

Earlier this summer, I presented something to my board that I was expecting to pass with little discussion. Instead, there was a lengthy discussion, a second discussion a month later, and an email discussion. Ultimately the proposal passed, but certainly not on the timeline I had envisioned.  But you know what?  That’s okay, because it means my board is doing their job. No non-profit leader should ever expect everything to sail through, especially on really big decisions.

Lesson #2: Stop underestimating the power of social media. If this transfer had been attempted even 5 years ago, I think it would have been a smoother road. People just weren’t as active and engaged and informed as they are today–and it’s all through social media. There are twitter accounts solely dedicated to this issue. Hundreds of people have shown up to meetings about Fair Park. By all appearances, this has caught quite a few people completely off-guard.  Back room deals, the bedrock of Dallas politics, just aren’t as easy any more.

Lesson #4: If people are accusing you of not being transparent, change your actions. There are many, many things that baffle me about the current situation. The board of the foundation has yet to meet, but they’re presenting to the city a management agreement and a budget. This just seems totally backwards to me.  Board members are fiscally responsible–shouldn’t they have some input?  They should have been meeting for a year before they ever introduced a formal contract to the city. And yet, no changes are being made.  Instead, threats are being tossed around that this must be voted on in September–OR ELSE.  And so people are deeply worried about various shenanagins. As they should be.  It’s just baffling.  Also, here’s the funding chart that was presented to the City. 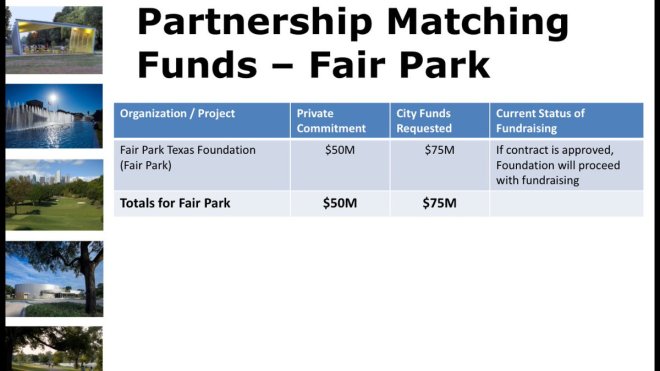 If I had presented that to anyone, I would have been laughed out of the room and out of the job.  And perhaps that’s what frustrates me most about this whole situation. It appears that they’re being held to an entirely different standard than other non-profits. And that’s bad for all of us.

The worries continue about Fair Park. But at least it’s another opportunity to learn how to be a better Executive Director. Just do the opposite of the folks trying to take over Fair Park.

Professional history and museum nerd, among other things. I've worked at Dallas Heritage Village since 2004, first as the educator, and became Executive Director in 2014. View all posts by Melissa

3 thoughts on “Lessons from Fair Park”